Kari Holloway is a fourth generation farm girl from Leesburg, Georgia with a degree in Psychology which she puts to good use to create believable characters. Holloway writes in several genres although her novels fall into contemporary romance and fantasy. She has written five novels, three in the Laughing P series (contemporary romance) and two in the Devil’s Playground series (paranormal fantasy). They are Cracked but Never Broken (Hearts and Blades, November, 2016), Behind the Lens (Hearts and Blades, January 2017) Never too Late (Hearts and Blades, August 2017) from the Laughing P Series, and Forgotten (Self published, March 2017) Cry of Gold (self published, June 2017) from the Devil’s Playground Series. She has started on the third in the Devil’s Playground Series which she hopes to publish by early in 2018. She also has written several short stories.

SR: What is the next book you’re working on in the Devil’s Playground series? Would you like to tell us a little about it?

KH: Mark of Cain will be the third book in the Devil’s Playground series. It will be released in early 2018 followed by the Howling King in late 2008. Mark of Cain sees Alex journey off-world with Morgan for a rather simple task of exterminating a thief, but things don’t go as planned for the kitsunes.

SR: The Laughing P series has three books. Will the Devil’s Playground also end with the third book?

KH: The Laughing P actually started as a standalone with Cracked But Never Broken. It was from curious readers wanting to know what happened that sparked Behind the Lens and Never too Late. I’ve got some familiar faces beginning to stir, and I wouldn’t say the Laughing P story is over, but it will definitely reappear with either the cousins or with Dominick, Red, and Chatan as the focal points.

As far as the Devil’s Playground goes, I really don’t have an idea of when the series will end. The rough idea right now is 9 books, but since I don’t plot it could be fewer or more depending on what antics Alex and her crew pull in the Howling King and subsequent novellas.

SR: You have mentioned in another interview that you are a pantser. How does that work with series? Do you have an idea when you write the first book that it will be part of a series or does it just happen and you go with the flow of it?

KH: It generally just flows. I write longer works in first person, and I tend to get into the mindset of my main characters. I generally have an idea, or in this case with the Howling King a title with no real concrete structure.

SR: The Laughing P series are based on your farm. Is it autobiographical? What is the setting and influence for the Devil’s Playground series?

KH: No. Laughing P may take place on a ranch using my real-life experiences with farm animals, but it is as far from autobiographical as possible. Devil’s Playground was a story that I started in high school and Alex never left my mind. She’s been asking to get a revisiting and proper retelling of her story for two years now.

SR: What are the other genres you write in and why did you choose them? What’s the attraction?

KH: I write whatever comes to mind. I think I cover a lot of different genres because I don’t plot. Beneath the Masks is a short story fantasy historical romance (say that five times fast) that takes place on a war-torn planet. Gunpowder and Wool, a short story featured in A Haunting of Words, is a military comedy. The Laughing P series is a mix between contemporary romance and western romance. Ghostwriter’s Affair is a flash fiction comedy about a writer and his addiction to coffee. Devil’s Playground is a mix of paranormal, fantasy, and urban fantasy.

As you can see, I’m all over the place. People aren’t static, and writers are far from normal. It makes sense we’d write different things as well.

SR: I remember you mentioned your interest in writing about food? Are you planning on going ahead with this and what will you do? Will it be a book, essays or blog posts?

KH: Yep. Maw-Payne has a food blog on WordPress. I don’t know much more than that at the moment. There are a few posts on there: mawpaynescorner.wordpress.com

SR: Will you start another series after you finish the book you are writing? What will it be about and what genre?

KH: I’ve got a variety of things on the backburner. I’ve got a couple of contemporary romance books that could become part of the Laughing P or they could stand on their own. I’m working on a novelette “Hidden Cove”: a pirate / selkie crossover that takes place in the Caribbean, and multiple short stories that vary from fantasy romance to gruesome horror. I’ll write whichever voice becomes clearest once I finish the current project I’m on.

Excerpt from Cracked But Never Broken 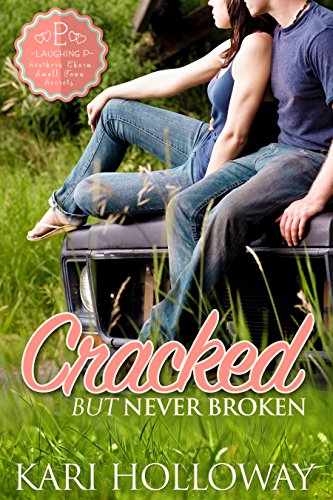 The stars looked like a million pinpricks in the sky. The trees, just cut-outs from black construction paper, divided the sky right over this little piece of heaven. Nothing could have been more perfect. I held the girl, turned woman, next to me. Underneath the hard layers of dirt, she still smelled of crisp apples.

Would she still taste as sweet?

She turned that lovely little bow mouth up toward me, her perky tongue darted out, wetting her lips. She traced a perfect finger along my jaw; my eyes closed at her touch. Her lips were soft, hesitant. She nuzzled my cheek before nipping along my ear, sending shivers along my skin, turning the chilled night air hot.