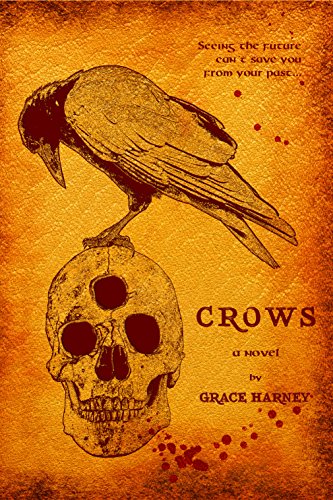 Annie Murphy can sometimes tell the future. It’s the past she has trouble with.

When her brother’s witch-girlfriend goes missing days after an invocation ritual, Annie has every reason to suspect him. But he says he didn’t do it, and Annie isn’t about to send another innocent man in her family to jail.

When a confrontation with her brother Johnny turns violent, Annie flees into the worst blizzard to hit the area in years. Led by her Sight, she arrives at a rundown inn where she meets Crow. Another powerful psychic—and a witch that can control her namesake birds—Crow seems to be hated, feared, respected and loved, all at the same time. Soon Annie begins to wonder about things. Like why Crow appears to be connected to every suspicious disappearance over the past fifty years in the small town of Raven City. Why Johnny’s missing girlfriend might be one of them. Why Crow has walked free every single time. And if Annie doesn’t stop her, why she might again.

WARNING: Contains swear words, violence, and dark themes. Recommended for readers 15 and up.

“You think teenage girls aren’t terrible creatures. Take it from me. Sometimes, they’re the worst.”

Grace Harney has been writing since she was thirteen years old. She’s from India, and has lived in New Zealand, Louisiana and Florida. Today she lives in New Jersey with her husband and three cats.

She writes paranormal, urban fantasy, and basically anything else that has a supernatural flavor and a strong sense of realism. She enjoys reading novels by Stephen King, Gillian Flynn, J.K. Rowling (and Robert Galbraith), Lisa Scottoline, Jodi Picoult, and she has a special place in her heart for books by Christopher Pike, the reason she began writing in the first place.

She just wants to tell you a good story.