‘Romance, Magic, Action…Illusional Reality has it all.’ Emily Woodmansee

Nobody expects to stare death in the face only to find out your entire life is a lie. Rescued by Salco, marketing executive Becky finds herself in an unknown magical world filed with happy people that try to forget their land is on the brink of destruction.

Becky will soon learn that her arrival is no accident. If learning that she is Thya, the heir of the enchanting land isn’t enough, she’s then told that an Oracle prophesied that she will save the gentle Tsinians from slavery and domination by Darthorn, the Warlord of Senx.

It is at a festival where she is introduced to the Tsinian council and her kinsmen, that she learns the whole truth. The council are so certain that a union between Darthorn’s son, Kovon and Thya will create peace between the two lands. However, Darthorn has plans for Tsinia as does Kovon for Thya and neither are good.
Although her future has been planned and if she is to save Tsinia she must marry Kovon, Thya gives her heart to another. A love that is forbidden and dangerous.

Illusional Reality is a story about hope, courage, love and sacrifice.
‘This story is unique. No typical fantasy stereotyping.’

Alkazar did not sleep well. His fear for Thya’s safety kept him awake through the night. As always, he ran scenarios through his head. His mind raced, and always he came up with a counter attack. He wanted his princess prepared for anything.

“She ought not to partake in the consumption of food and drink,” he said, shattering the silence of darkness.

Thya spent the next light preparing herself for the confrontation with Darthorn. Pertius gave instructions to her on what she should say, and the correct way to behave. He instilled into her the importance of decorum. Alkazar bombarded her with a series of imagined events and instructed her on how to attend to them. By the time they had finished, her mind was reeling. She had barely enough time to visit the Plecky for a short prayer before her departure.

The journey was slow and torturous to the legs. To Thya, the mountain seemed to grow with every step. It seemed like hours had passed before she sighted the black gates of Senx. She prayed for strength, questioning if this was the beginning or the end?

Armed guards escorted Thya through the city. The sight stunned her, though she wasn’t quite sure what to expect. She presumed the Senxs would appear vicious looking, like her escort of guards. To her surprise, the citizens appeared similar to Tsinians. They hurried around, busy with their tasks, yet merry. They were well groomed and appeared healthy and happy. It was obvious that no matter what she thought about Darthorn, none could say he wasn’t good to his kinsmen.

Thya was led to a large, bare chamber. The hall was constructed in gold. It glittered and shined, giving the chamber a rich and powerful feel.

The guards withdrew from the chamber without announcement. It was then Thya became aware she was not alone. 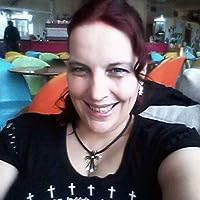 Karina Kantas is the author of the popular MC thriller series, OUTLAW and the loved romantic fantasy, Illusional Reality.

She also writes short stories and when her imagination is working over time, she writes thought provoking dark flash fiction.

There are many layers to Karina’s writing style and voice, as you will see in her flash fiction collection, Heads & Tales and in UNDRESSED she opens up more to her fans, giving them another glimpse into her warped mind.

When Karina isn’t busy working on her next best seller, she’s designing teasers, book trailers, recording audio or videoing small readings and then working on Twitter and FB posts.

Karina writes in the genres of fantasy, romance, sci-fi, horror, thrillers and comedy.

Her inspirations are the author S.E.Hinton and the rock band Iron Maiden.