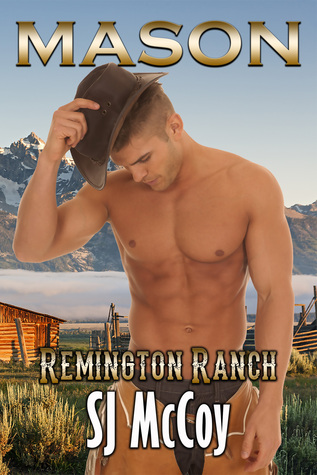 Gina returns home after ten years. Yet the memories and the reason she ran away from are still very much alive and she has to get over her past before she begins a new life with Liam in NY. All she hopes to do is stay for awhile until she can sell the old house and bring her father to NY. But Mason has other plans. He has still not forgotten her and tries as hard as he can to win her over with the help of his brothers and Gina’s father. Can he succeed and stop Gina getting married and leaving Montana?

Mason the first book in the Remington Ranch series is an interesting story about a boy and girl who falls in love but are torn apart by words uttered by one and heard out of context by the other. Gina and Mason’s love story would not be written if not for the interference of Guy.

What makes this a story you want to keep reading, is the characters and dialogue. They stand out and make you want to like them. You want to cheer Mason in his quest and also make Gina realize what mistakes she made in her assumptions so many years ago. You also want to know more about Mason’s family and you certainly want to see justice for April. You even feel sorry for Liam and later begin to like him. But it’s Mason’s story through and through. Here is a character you can fall in love with. He’s smoking hot, caring, intelligent, and honorable, and has a sense of humor that’s hard to resist even when he’s at his lowest. He’s certainly not perfect and that’s his appeal. Mason may appear sexist. He’s the alpha male who wants to protect the ones he loves, but he’s not overbearing or cruel.

It’s remarkable to see how a little misunderstanding can lead to so much heartache and even after ten years Gina is unable to put history behind her. She succeeds to a point, letting the nagging detail disappear, but just at the moment she begins to relax Guy returns to sow doubt in her mind and she’s back where she started. Mason and Gina struggle to come to terms with their past and what they have become. They have both grown since they last met; they are successful and although Mason can’t imagine why Gina would want to work, after all,

“It’s part of his destiny to protect and provide”.

he doesn’t force her but understands that her career makes her happy.

They have both changed. They have grown and have to get to know each other all over again.

“That’s what I was thinking. I don’t know you. I know who you were, but not who you have been these last ten years, not who you’ve become.”

McCoy is in control of the story. She sits back and let’s her characters take over. they are spunky, hot headed and very real.

I loved the dialogues. The snarky comments, the playful banter between Mason and Gina even when they are at the most stressed out moments speak of how well McCoy not only sees into the characters but understands what they are going through.

I’m looking forward to reading the rest of the series and finding out more about the lives and loves of the other Remingtons.