I was up the whole night reading this. It’s an unusual book and well worth reading. I posted my review on Goodreads, but you can also read it below.

Not your everyday love story of happily ever after 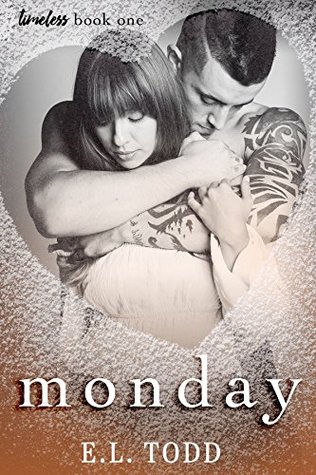 Monday by E.L. Todd is a difficult book to read, but it’s a book you want to keep reading because it is well written and you can keep going and also because the story is gripping and moves fast. I read this overnight as I knew I couldn’t go to sleep until I finished it.

It begins with Frankie and Hawke meeting in the Grind and then going out for a date. But that’s the end of their relationship, or so it seems, until they meet again and Frankie offers friendship which Hawke accepts. It’s a strange experience for him as he has never had a real friend. You think it’s a love story, but then realize it’s very different from the boy meets girl kind of happily ever after romances. These are real characters with real flaws. They are also dealing with complex issues and there are things hidden beneath the surface that Todd brings out very subtly as the story unfolds.

There is an ominous quality to the story as you wonder if something bad is going to happen. I had shelved this book a while back and couldn’t remember why I had done so. I didn’t remember the synopsis or the genre. So when Hawke started behaving in a strange way the suspense made me wonder if it would end in murder. Kudos to the writer for keeping me guessing.

Although they’ve decided on being just friends, the attraction is still very much there, but neither Frankie nor Hawke are willing to act on it and we learn why as events unfold. There’s a lot of darkness that keeps breaking the surface. Frankie and Hawke are similar; they both had a hard childhood, but while Frankie deals with hers and has come out strong, Hawke is still grappling with his and floundering.

Todd successfully blends their pasts and their present lives to also bring in other issues like child abuse and domestic violence, but she keeps this in the background. Hawke has come to terms with his abusive childhood, and we understand the reasons why he holds back on relationships and is reluctant to open up to Frankie. As the story progresses he heals and changes as Frankie stands firm giving him the space to needs. While Hawke has escaped the abusive father he is still involved in what happens because the violence has now turned towards his mother. She suffers from Stockholm syndrome and doesn’t want the police involved leaving Hawke unable to help her even though he wants to.

It’s a sad story with a lot of complicated issues, yet the relationship that develops between Hawke and Frankie is interesting. Frankie’s strength to stand up for what she believes in and her belief in Hawke as a good person is not enough to keep him. Hawke changes with love and trust but is it enough and can it cleanse him from what he has gone through and what he sees happening to his mother? I wasn’t expecting the book to end the way it did. I was disappointed, but thinking back I realize this was the best way to end the story. I hope Book two in the series is just as interesting.