A story that could have been longer 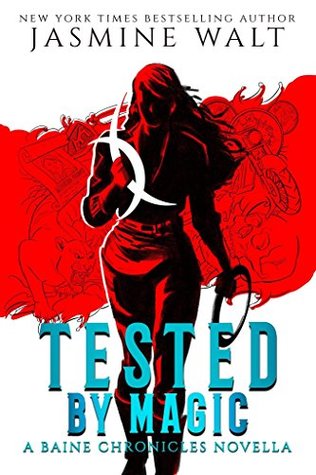 Tested by Magic introduces you to an amazing world of mages, shifters and magic and to Sunaya, an outcast from the panther-shifter clan who has to keep her origins secret because if the mages find out she’s part mage that would be her end.

Full of action from the word go we are introduced to Sunaya training in the backyard with Roanas. It is going to be her first day at work as an enforcer, as she joins the ranks of the other bounty hunters of Solantha. Sunaya hears about a robbery and the “record-breaking bounty” offered to anyone who catches a gang of robbers and dreams of becoming the first rookie to take on the case and win it as it just might help her buy a much coveted steambike.

She walks into the Enforcer’s Guild wanting to be part of the Main Crew because they get all the “lucrative dockets” but her dreams take a back seat as she gets into a fight with the crew and is thrown out. She is disappointed as she finds herself paired with an uptown girl on a small case as Captain Galling thinks the “case would be best solved by both a shifter nose and a human.”

What was just a case of a missing child turns out to be something else. Can Sunaya keep her secret and help save the little missing girl or will they both be punished for their magic?

Walt creates a very believable environment. Even though it’s a magical world it’s interesting how the caste hierarchies of mages, shifters and humans reflect caste and race in the real world. The difference in lifestyles of the residents in Solantha and the attitudes towards each other are also well portrayed.

The story is gripping and moves at a fairly even pace. This is my first foray into the Baine Cronicles. Although there is just enough story without making it boring, this is one novella that could have benefited by being turned into a novel as it has all the elements that can make it an interesting read and I think Walt could have added more without harming the story. You’d really be forgiven if you don’t want to move out of Solantha after reading this.